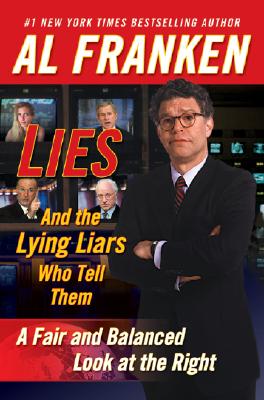 LIES AND THE LYING LIARS WHO TELL THEM : A FAIR AND BALANCED LOOK AT THE RIGHT

HARDBACK IN JACKET [FRANKEN, AL] A FAIR AND BALANCED LOOK AT THE RIGHT

Al Franken, "one of our savviest satirists" ("People"), takes on the issues, the politicians, and the pundits in one of the most anticipated books of the year.
For the first time since his own classic "Rush Limbaugh Is a Big Fat Idiot" and "Other Observations," Al Franken trains his subversive wit directly on the contemporary political scene. Now, the "master of political humor" ("Washington Times") destroys the myth of liberal bias in the media, and exposes how the Right shamelessly tries to deceive the rest of us.
No one is spared as Al uses the Right's own words against them. Not the Bush administration and their rhetorical hypocrisy. Not Ann Coulter and her specious screeds. Not the new generation of talk-radio hosts, and not Bill O'Reilly, Roger Ailes, and the entire Fox network. This is the book Al Franken fans have been waiting for (and his foes have been dreading). Timely, provocative, unfailingly honest, and always funny, "Lies" is sure to become the most talked about book of political humor in 2003 and beyond.

Title: LIES AND THE LYING LIARS WHO TELL THEM : A FAIR AND BALANCED LOOK AT THE RIGHT

LIES AND THE LYING LIARS WHO TELL THEM : A FAIR AND BALANCED LOOK AT THE RIGHT