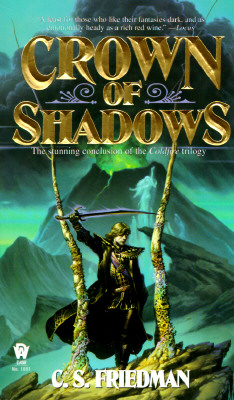 Unlikely allies Damien and Tarrant are faced with an enemy who may prove invulnerable--a demon who has declared war on mankind. Called Calesta, he is a master of illusion and devourer of pain, and he plans to remake the human species until it exists only to sate his unquenchable thirst for suffering.
The war against Calesta will take Damien and Tarrant from the depths of Hell to the birthplace of demons and beyond--in a battle that could cost them not only their lives, but the very soul of mankind.
Crown of Shadows is the stunning conclusion to C. S. Friedman's Coldfire trilogy.

From the Trade Paperback edition.