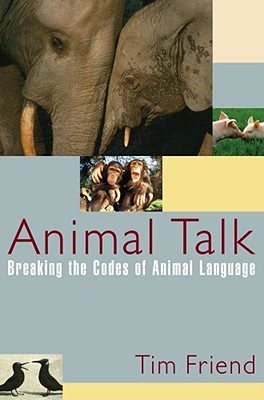 Is it possible that there is a universal language spoken and understood by all animals on earth, including humans? Is human language unique, as linguists and philosphers have taught for centuries, or could it share and combine well-developed components of other species' communications? Do you long to know what wild animals are discussing and what your dog, cat, bird, fish, or horse is really saying?
Animal Talk, the first authoritative, popular book about animal communication, answers these and other provocative questions with often astonishing news about the latest scientific discoveries. Using his ten years of field research and numerous interviews with preeminent scientists in the field and under the sea, veteran journalist and popular science write Tim Friend helps us understand what lies behind the eyes, within the sounds and scents, and beneath the flashy displays and postures of our animal neighbors.
The world has an estimated 10 million species, all chattering away with noisy and smelly abandon, using their own seemingly unique and baffling signals. Nonetheless, Friend reveals that animals and humans can easily understand each other because every creature on earth "speaks" a common nonverbal language -- an animal Esperanto that has developed through hundreds of millions of years of evolution. Through a skillful interweaving of amazing facts and compelling true animal stories, Friend demonstrates how similar human behavior and language are to other species', including the ways we attract members of the opposite sex, rear children, and compete in society.
A scientific Dr. Dolittle, author Tim Friend is your guide on a fascinating tour of the animal kingdom. Along the way, he enlists the enthusiastic translation services of the top scientists in animal communication to show a wonderful range of animals in action, to explain the intricate ways in which they use signals, and to interpret what they mean by them. From the Amazon and Central American rainforests to deep into the Ozarks, every environment Friend visits reveals a fascinating new insight and clue to the great puzzle of how animals communicate within and between species -- and how the many tongues, stripes, and resonances of the animal kingdom laid the original foundation for our own language.
Animal Talk tells the grand story of animal communication through the stories and signals of the animals themselves. Vital to our understanding of birds and bees, dogs and dolphins, and ourselves and our fellow primates, Animal Talk is also vital to the survival of our planet.