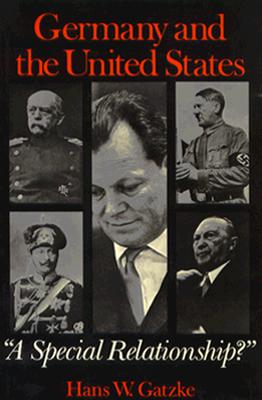 GERMANY AND THE UNITED STATES A SPECIAL RELATIONSHIP?

Beginning with Bismarck's forging of a nation with iron and blood, Gatzke tells of Germany's relentless struggle for domination in Europe and in the West, its defeat in two world wars, its division, East Germany's travail, and West Germany's search for identity as a modern democratic state. A discerning statement about Germany and other nations, this book reevaluates for the general reader and the historian the impact of rapid industrialization, the origins of the world wars, the question of war guilt, the decade of Weimar democracy, and the rise and fall of Hitler. Gatzke looks anew at the economic miracle in West Germany and the consequences of making prosperity the cornerstone of a new republic. It is to the realities of these German characteristics as an evolving nation-state that Gatzke relates American foreign policy and perceptions. He recounts the American fluctuations, from favorable to hostile to friendly, as Germany's policies and fortunes changed, and he places the division of Germany in historical perspective.

Title: GERMANY AND THE UNITED STATES A SPECIAL RELATIONSHIP?

GERMANY AND THE UNITED STATES A SPECIAL RELATIONSHIP?