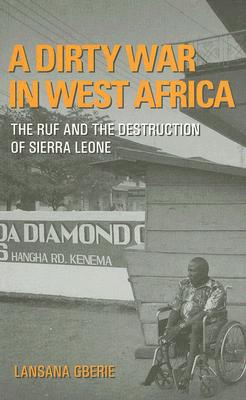 DIRTY WAR IN WEST AFRICA, A THE RUF AND THE DESTRUCTION OF SIERRA LEONE

A Dirty War in West Africa recounts Lansana Gberie's harrowing experiences as a journalist during the decade-long civil war in Sierra Leone. Since 1991, this West African nation has been brought to its knees by a series of coups, violent conflicts, and finally, outright war. The war has ended today, but it is clear that things are hardly settled. Focusing on the group spearheading the violence, the Revolutionary United Front (RUF), Gberie exposes the corruption and appalling use of rape and mutilation as tactics to overthrow the former government. Gberie looks closely at the rise of the RUF and its ruthless leader, Foday Sankoh, as he seeks to understand the personalities and parties involved in the war. This sobering and powerful account reveals the domestic and international consequences of the Sierra Leone conflict.

Title: DIRTY WAR IN WEST AFRICA, A THE RUF AND THE DESTRUCTION OF SIERRA LEONE

DIRTY WAR IN WEST AFRICA, A THE RUF AND THE DESTRUCTION OF SIERRA LEONE