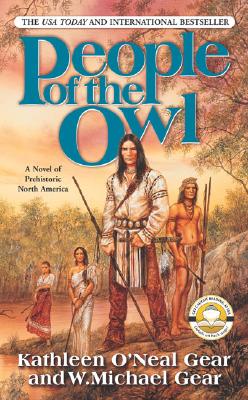 PEOPLE OF THE OWL

New York Times and USA Today bestselling authors W. Michael Gear and Kathleen O'Neal Gear are famous for writing novels about prehistoric America that are fast-paced, steeped in cultural detail, and smart. In People of the Owl they combine their distinctive trademark of high action with a rich psychological drama.

Four thousand years ago, in what centuries later will be the southern part of the United States, a boy is thrust into manhood long before he's ready. Young Salamander would much rather catch crickets and watch blue herons fish than dabble in the politics of his clan. But when his heroic brother is killed, Salamander becomes the leader of America's first city. He inherits his brother's two wives, who despise him, and is forced to marry his mortal enemy's daughter to forge an alliance for the trade goods his people desperately need.

Cast adrift in a stark wilderness of political intrigue where assassins are everywhere, young Salamander has no choice but to become a man-and quickly.

Title: PEOPLE OF THE OWL

PEOPLE OF THE OWL