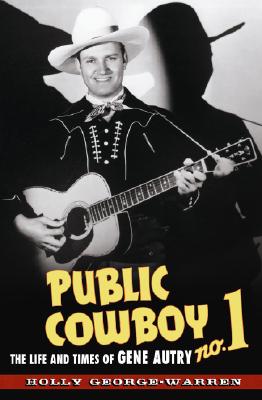 PUBLIC COWBOY NO. 1 LIFE AND TIMES OF GENE AUTRY

The only performer to earn 5 stars on the Hollywood Walk of Fame--for film, recordings, TV, radio, and live performance--Gene Autry was the singing cowboy king of American entertainment. Now, in Public Cowboy No.1, Holly George-Warren offers the first serious biography of this singular individual, in a fascinating narrative that traces Autry's climb from small-town farm boy to multimillionaire.
Here for the first time Autry the legend becomes a flesh-and-blood man--with all the passions, triumphs, and tragedies of a flawed icon. George-Warren recounts stories never before told, including revelations about Autry's impoverished boyhood, his adventures as an up-and-coming singer, and the impact his unbelievable success had on his personal life. She describes Autry's loving but doomed mother, who died on the brink of her son's success, and his ne'er-do-well father, who married five times and wandered the west. Autry battled his own demons but emerges here in a positive light, an immensely personable man, one of America's most charitable benefactors, known for his boundless generosity, and a patriot who enlisted during World War II. The book provides equally colorful details of Autry's lengthy radio and recording career, which included such classics as "Back in the Saddle Again" and "Rudolph the Red-Nosed Reindeer"; his movie career, where he breathed new life into the Western genre; and his role in early television, being the first movie star to develop his own TV shows. And along the way, we see how he invested shrewdly in radio, real-estate, and television, becoming the owner of the California Angels and the only entertainer listed among 1990's Fortune 400.
Based on exclusive access to Gene Autry's personal papers, as well as interviews with more than 100 relatives, employees, colleagues, and friends, this engaging biography brings to life a major Hollywood star--a man who, more than anyone else, put Western music and style on the American cultural map.

Title: PUBLIC COWBOY NO. 1 LIFE AND TIMES OF GENE AUTRY

PUBLIC COWBOY NO. 1 LIFE AND TIMES OF GENE AUTRY