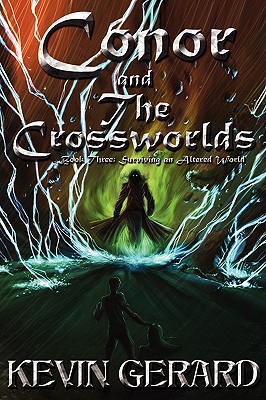 CONOR AND THE CROSSWORLDS BOOK THREE: SURVIVING AN ALTERED WORLD

Two teenagers, an altered world, and the search for the five keys... After divulging secrets about his adventures in the Crossworlds, something his mentors warned him never to do, Conor's world turns upside down. He and his high school girlfriend, Janine, watch in horror as a powerful warrior sent by the Circle of Evil destroys their world and imprisons everyone they know, including the Crossworlds Champions and most of the creators... Before fleeing the onslaught, the Lady of the Light appears before Conor and Janine. She explains that the Council of Seven placed the Five Keys of the Creators on different worlds just as the chaos began. If Conor and Janine can recover them, the Crossworlds will be restored. There are others looking for the keys, however, those who will use any means to destroy the two teenagers and keep the Crossworlds in disarray forever... Surviving an Altered World, the third book in the Conor and the Crossworlds series, begins with Conor and Janine facing a devastating destroyer who commands the elements of nature. The demon uses this awesome power to decimate Earth, imprisoning everyone they know in a chilling, lifeless state. Conor and his girlfriend must journey to different worlds in order to locate the Five Keys, restore order to the Crossworlds and save everyone they know...

CONOR AND THE CROSSWORLDS BOOK THREE: SURVIVING AN ALTERED WORLD