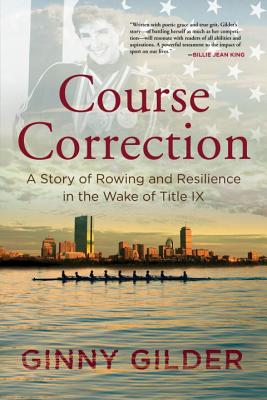 COURSE CORRECTION: A STORY OF ROING AND RESILIENCE IN THE WAKE OF TITLE IX

"Beautiful and important on many levels, Course Correction is about rowing and so much more . . . Ultimately it is about the transforming power of love, and, damnit all, it made me cry."--Daniel James Brown, author of The Boys in the Boat

"Written with poetic grace and true grit . . . A powerful testament to the impact of sport on our lives."--Billie Jean King

Wild meets The Boys in the Boat, a memoir about the quest for Olympic gold and the triumph of love over fear Forty years ago, when a young Ginny Gilder stood on the edge of Boston's Charles River and first saw a rowing shell in motion, it was love at first sight. Yearning to escape her family history, which included her mother's emotional unraveling and her father's singular focus on investment acumen as the ultimate trophy, Gilder discovered rowing at a pivotal moment in her life. Having grown up in an era when girls were only beginning to abandon the sidelines as observers and cheerleaders to become competitors and national champions, Gilder harbored no dreams of athletic stardom. Once at Yale, however, her operating assumptions changed nearly overnight when, as a freshman in 1975, she found her way to the university's rowing tanks in the gymnasium's cavernous basement. From her first strokes as a novice, Gilder found herself in a new world, training with Olympic rowers and participating in the famous Title IX naked protest, which helped define the movement for equality in college sports. Short, asthmatic, and stubborn, Gilder made the team against all odds and for the next ten years devoted herself to answering a seemingly simple question: how badly do you want to go fast? Course Correction recounts the physical and psychological barriers Gilder overcame as she transformed into an elite athlete who reached the highest echelon of her sport. Set against the backdrop of unprecedented cultural change, Gilder's story personalizes the impact of Title IX, illustrating the life-changing lessons learned in sports but felt far beyond the athletic arena. Heartfelt and candid, Gilder recounts lessons learned from her journey as it wends its way from her first glimpse of an oar to the Olympic podium in 1984, carries her through family tragedy, strengthens her to accept her true sexual identity, and ultimately frees her to live her life on her terms.

Title: COURSE CORRECTION: A STORY OF ROING AND RESILIENCE IN THE WAKE OF TITLE IX

COURSE CORRECTION: A STORY OF ROING AND RESILIENCE IN THE WAKE OF TITLE IX