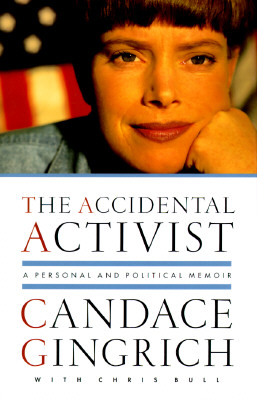 ACCIDENTAL ACTIVIST : A PERSONAL AND POLITICAL MEMOIR WITH CHRIS BULL

When Candace Gingrich met Roseanne Barr at a GLAAD dinner in 1995, the actress said, "Don't worry, honey, I've got a weird brother, too." Candace laughed, and at the same time realized how significant the moment was: She was speaking to a celebrity at a gay rights fund-raiser about her conservative half-brother. Her lesbianism, and her relation to Speaker of the House Newt Gingrich, had catapulted her to a position both exhilarating and terrifying. She had become, quite accidentally, an activist.

This is the story of how a lesbian named Candace grew up surrounded by a loving, supportive family, went to college, came out of the closet, fell in love, worked hard at her job and played hard at rugby in a sleepy little town in Pennsylvania. Her life was quiet, her circle of friends tight, her family accepting of her girlfriend. But all the while, Candace's half-brother was realizing his political aspirations, gaining the ears of mighty, conservative politicians, and becoming a major presence in Congress. It wasn't until the Republican sweep of both houses in 1994, when Newt Gingrich became Speaker of the House, that Candace began listening to his political ideas. Newt had become conservative with a capital "C," aligning himself with antigay figures like Pat Robertson. How, Candace wondered, could her brother, the one who treated her girlfriend and their relationship with the utmost respect, be espousing discriminatory rhetoric? How could he vote to reject President Clinton's compromise on the gays-in-the-military issue, to prohibit use of federal funds for public schools that allow open discussion of gay concerns, to discharge people in the military who test HIV-positive, and tooverturn a District of Columbia bill that allows unmarried couples to register as domestic partners, all without any stirrings of conscience?

Though Candace was troubled, she did not speak out. It was not until a perceptive reporter "outed" her to the press that, suddenly, she was fielding phone calls from every network. And just as suddenly, she realized it was time to challenge her brother on his hateful policies.

In "The Accidental Activist, Candace Gingrich takes us on an intimate tour of life in the Gingrich family, growing up gay, and finding her activist voice. Her mother is convinced that she and Newt could find common ground if they just sat down and took the time. Until then, Candace will continue her crusade. A tireless lobbyist for gay issues and a political force in her own right, Candace, who was named Spokesperson for the Human Rights Campaign in 1995, is not giving up hope for Newt, but she's surely giving him a run for his money.

ACCIDENTAL ACTIVIST : A PERSONAL AND POLITICAL MEMOIR WITH CHRIS BULL