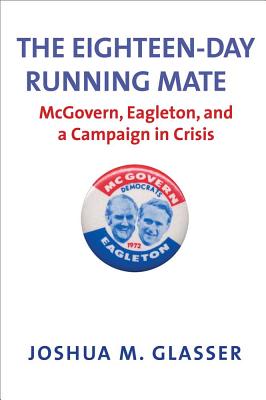 EIGHTEEN-DAY RUNNING MATE, THE MCGOVERN, EAGLETON AND A CAMPAIGN IN CRISIS

No skeletons were rattling in his closet, Thomas Eagleton assured George McGovern's political director. But only eighteen days later--after a series of damaging public revelations and feverish behind-the-scenes maneuverings--McGovern rescinded his endorsement of his Democratic vice-presidential running mate, and Eagleton withdrew from the ticket. This fascinating book is the first to uncover the full story behind Eagleton's rise and precipitous fall as a national candidate.

Within days of Eagleton's nomination, a pair of anonymous phone calls brought to light his history of hospitalizations for "nervous exhaustion and depression" and past treatment with electroshock therapy. The revelation rattled the campaign and placed McGovern's organization under intense public and media scrutiny. Joshua M. Glasser investigates a campaign in disarray and explores the perspectives of the campaign's key players, how decisions were made and who made them, how cultural attitudes toward mental illness informed the crisis, and how Eagleton's and McGovern's personal ambitions shaped the course of events.

Drawing on personal interviews with McGovern, campaign manager Gary Hart, political director Frank Mankiewicz, and dozens of other participants inside and outside the McGovern and Eagleton camps--as well as extensive unpublished campaign records--Glasser captures the political and human drama of Eagleton's brief candidacy. Glasser also offers sharp insights into the America of 1972--mired in war and anxious about the economy, a time with striking similarities to our own.

Title: EIGHTEEN-DAY RUNNING MATE, THE MCGOVERN, EAGLETON AND A CAMPAIGN IN CRISIS

EIGHTEEN-DAY RUNNING MATE, THE MCGOVERN, EAGLETON AND A CAMPAIGN IN CRISIS