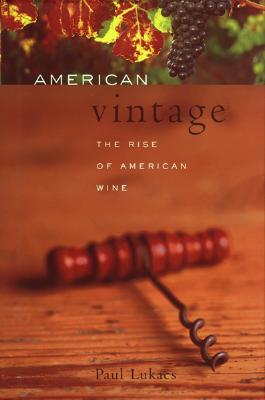 Only a generation ago, the United States was little more than a footnote in the story of wine. Then, seemingly overnight, everything changed. American varieties began outscoring their counterparts in international competitions and tantalizing palates at home and abroad. Today, American wines not only compete successfully with prestigious imports but also set international standards for style and quality. How did a country with virtually no winemaking traditions of its own suddenly become a world leader?
In AMERICAN VINTAGE, Paul Lukacs tells the story of the improbable rise of American wine. He populates his narrative with a series of quirky heroes and visionaries who changed the course of wine history. They include Nicholas Longworth, the founding father of American wine, a diminutive real estate tycoon who in the decades before the Civil War transformed Ohio into "the American Rhineland"; George Husmann, a nineteenth-century Missouri grape grower who passionately believed that American wines belonged on American supper tables; and Gustave Niebaum, a Finnish sea captain who made a fortune in the fur trade and went on to establish one of California's premier vineyards. Lukacs chronicles the fall of wine during the dark days of Prohibition and then its gradual rise at the hands of the "first families of American wine" -- the Mondavis and the Gallos -- who held opposing views of the new direction that American wine would take, with important consequences for its future.
In chronicling the tumultuous history of wine, Lukacs reveals as much about American culture as he does about wine and viticulture.