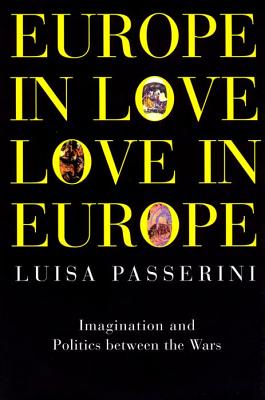 EUROPE IN LOVE, LOVE IN EUROPE : IMAGINATION AND POLITICS BETWEEN THE WARS

Before World War II an intimate connection between the ideas of Europe and romantic love was widely accepted and virtually unchallenged. Only after Europe was ravaged by war and fractured by superpower conflict was this connection called into question. Today, with the success of the European Union, such themes are reemerging in art, literature, music, and everyday conversation.

In Europe in Love, Love in Europe we revisit Europe between world wars to explore the lost connections between love, culture, and ideology. Passerini investigates different ways in which historians, politicians, psychoanalysts, and psychologists analyzed the crisis of European civilization, providing a history of ideas and emotions. Her focus on specific texts ranges from best-selling novels to artworks set in the context of debates on marriage, sex, and friendship. Europe in Love, Love in Europe concludes with the story of a correspondence between spouses, an English woman and a German man during World War II, a powerful example of what it could mean to live the European dimension of a love relationship in that historical moment.

Passerini offers a compelling original perspective on the modern anxiety over national identity and European unity-and a powerful rejoinder to political and cultural Eurocentrism.

Title: EUROPE IN LOVE, LOVE IN EUROPE : IMAGINATION AND POLITICS BETWEEN THE WARS

EUROPE IN LOVE, LOVE IN EUROPE : IMAGINATION AND POLITICS BETWEEN THE WARS