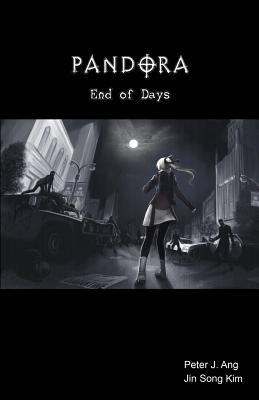 A fast-paced thriller that combines a gripping mystery the likes of Lara Croft's TOMB RAIDER adventures with the world-ending conspiracies of Resident Evil and the merciless brutality of The Walking Dead, PANDORA End of Days is an exhilarating reinvention of the Zombie survival-horror genre elegantly illustrated in a uniquely beautiful gray-scale mix of Japanese Manga and American Comic Book art style that is sure to leave a bloody impression on you. Synopsis: The most amazing archaeological discovery of our time-- a sarcophagus from an ancient civilization that predates the Egyptian Pyramids by more than fifty thousand years--is being broadcast as a live public exhibit on national TV. But in their haste to reveal a glimpse of what could be the origin of mankind, the scholars of the OBARI Foundation instead unleash an ancient plague upon the modern world. This is the age-old story of the curious--and of those who must race to close the door on what should never have been opened... This is PANDORA, the End of Days... ----------- ** BEST-SELLING Manga on AMAZON Kindle going 3+ years in a row ** With a consistent rating score of 5 stars from readers, this graphic novel contains over 200+ pages of haunting artwork from the talented Jin Song Kim and a story written by Peter J. Ang - a featured author in Amazon's KDP Comics Publishing rising stars. PANDORA End of Days is must try, especially if you're a fan of other epics like World War Z. ----------- ----------- For more info on the series: http: //www.realinterfacestudios.com LIKE US on FaceBook to receive updates and free stuff: http: //www.facebook.com/realinterfacestudios Paranormal / Survival Horror / Plague / Zombie Apocalypse