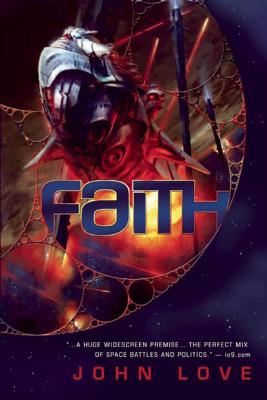 Moby Dick meets Duel in John Love's debut novel of Space Opera and Military Science Fiction Faith is the name humanity has given to the unknown, seemingly invincible alien ship that has begun to harass the newly emergent Commonwealth. 300 years earlier, the same ship destroyed the Sakhran Empire, allowing the Commonwealth to expand its sphere of influence. But now Faith has returned The ship is as devastating as before, and its attacks leave some Commonwealth solar systems in chaos. Eventually it reaches Sakhra, now an important Commonwealth possession, and it seems like history is about to repeat itself. But this time, something is waiting: an Outsider, one of the Commonwealth's ultimate warships. Slender silver ships, full of functionality and crewed by people of unusual abilities, often sociopaths or psychopaths, Outsiders were conceived in back alleys, built and launched in secret, and commissioned without ceremony. One system away from earth, the Outsider ship Charles Manson makes a stand. Commander Foord waits with his crew of miscreants and sociopath, hoping to accomplish what no other human has been able to do -- to destroy Faith

Skyhorse Publishing, under our Night Shade and Talos imprints, is proud to publish a broad range of titles for readers interested in science fiction (space opera, time travel, hard SF, alien invasion, near-future dystopia), fantasy (grimdark, sword and sorcery, contemporary urban fantasy, steampunk, alternative history), and horror (zombies, vampires, and the occult and supernatural), and much more. While not every title we publish becomes a New York Times bestseller, a national bestseller, or a Hugo or Nebula award-winner, we are committed to publishing quality books from a diverse group of authors.