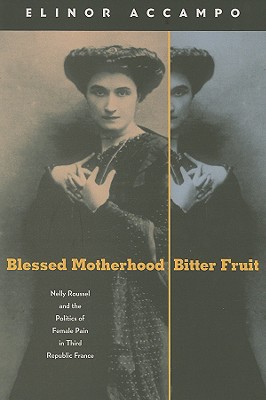 Nelly Roussel (1878-1922)--the first feminist spokeswoman for birth control in Europe--challenged both the men of early twentieth-century France, who sought to preserve the status quo, and the women who aimed to change it. She delivered her messages through public lectures, journalism, and theater, dazzling audiences with her beauty, intelligence, and disarming wit. She did so within the context of a national depopulation crisis caused by the confluence of low birth rates, the rise of international tensions, and the tragedy of the First World War. While her support spread across social classes, strong political resistance to her message revealed deeply conservative precepts about gender which were grounded in French identity itself.

In this thoughtful and provocative study, Elinor Accampo follows Roussel's life from her youth, marriage, speaking career, motherhood, and political activism to her decline and death from tuberculosis in the years following World War I. She tells the story of a woman whose life and work spanned a historical moment when womanhood was being redefined by the acceptance of a woman's sexuality as distinct from her biological, reproductive role--a development that is still causing controversy today.