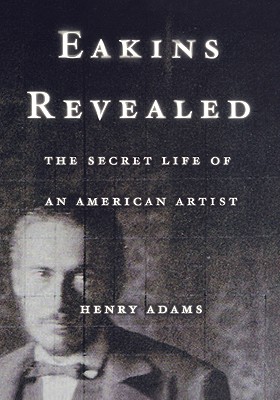 2005 VG/VG HB IN DJ, UNUSED, LIKE NEW [ADAMS, HENRY] THE SECRET LIFE OF AN AMERICAN ARTIST

Thomas Eakins is widely considered one of the great American painters, an artist whose uncompromising realism helped move American art from the Victorian era into the modern age. He is also acclaimed as a paragon of integrity, one who stood up for his artistic beliefs even when they brought him personal and professional difficulty--as when he was fired from the Pennsylvania Academy of Art for removing a model's loincloth in a drawing class.
Yet beneath the surface of Eakins's pictures is a sense of brooding unease and latent violence--a discomfort voiced by one of his sitters who said his portrait "decapitated" her. In Eakins Revealed, art historian Henry Adams examines the dark side of Eakins's life and work, in a startling new biography that will change our understanding of this American icon. Based on close study of Eakins's work and new research in the Bregler papers, a major collection never fully mined by scholars, this volume shows Eakins was not merely uncompromising, but harsh and brutal both in his personal life and in his painting. Adams uncovers the bitter personal feuds and family tragedies surrounding Eakins--his mother died insane and his niece committed suicide amid allegations that Eakins had seduced her--and documents the artist's tendency toward psychological abuse and sexual harassment of those around him.
This provocative book not only unveils new facts about Eakins's life; more important, it makes sense, for the first time, of the enigmas of his work. Eakins Revealed promises to be a controversial biography that will attract readers inside and outside the art world, and fascinate anyone concerned with the mystery of artistic genius.

Title: EAKINS REVEALED THE SECRET LIFE OF AN AMERICAN ARTIST