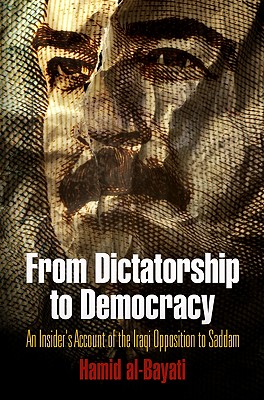 Selected by Choice magazine as an Outstanding Academic Title

Today, Hamid al-Bayati serves as Iraqi ambassador to the United Nations. But for many years he lived in exile in London, where he worked with other opponents of Saddam Hussein's regime to make a democratic and pluralistic Iraq a reality. As former Western spokesman for the Supreme Council for the Islamic Revolution in Iraq (SCIRI), and as a member of the executive council of the Iraqi National Congress, two of the main groups opposing Saddam's regime, he led campaigns to alert the world to human rights violations in Iraq and win support from the international community for the removal of Saddam.

An important Iraqi diplomat and member of Iraq's majority Shia community, he offers firsthand accounts of the meetings and discussions he and other Iraqi opponents to Saddam held with American and British diplomats from 1991 to 2004. Drawn from al-Bayati's personal archives of meeting minutes and correspondence, From Dictatorship to Democracy takes readers through the history of the opposition.

We learn the views and actions of principal figures, such as SCIRI head Sayyid Mohammed Baqir Al-Hakeem and the other leaders of the Iraqi National Congress, Ahmed Chalabi and his Kurdish counterparts, Masound Barzani and Jalal Talabani. Al-Bayati vividly captures their struggle to unify in the face of not only Saddam's harsh and bloody repression but also an unresponsive and unmotivated international community. Al-Bayati's efforts in the months before and after the U.S. invasion also put him in direct contact with key U.S. figures such as Zalmay Khalilzad and L. Paul Bremer and at the center of the debates over returning Iraq to self-government quickly and creating the foundation for a secure and stable state.

Al-Bayati was both eyewitness to and actor in the dramatic struggle to remove Saddam from power. In this unique historical document, he provides detailed recollections of his work on behalf of a democratic Iraq that reflect the hopes and frustrations of the Iraqi people.