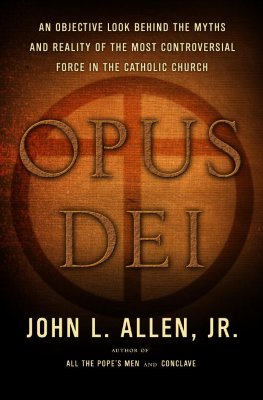 The first serious journalistic investigation of the highly secretive, controversial organization Opus Dei provides unique insight about the wild rumors surrounding it and discloses its significant influence in the Vatican and on the politics of the Catholic Church. Opus Dei (literally the work of God) is an international association of Catholics often labeled as conservative who seek personal Christian perfection and strive to implement Christian ideals in their jobs and in society as a whole. Founded in Spain in 1928, it now has 84,000 members (1,600 of whom are priests) in eighty countries. But far from running bingo nights at local parishes, Opus Dei has become a center of controversy and suspicion both within and outside the Church. It has been accused of promoting a right-wing political agenda and of cultlike practices, aggressive recruiting, brainwashing new recruits, and isolating members from their families. Its notoriety escalated with the publication of the runaway bestseller The Da Vinci Code (Opus Dei plays an important and sinister role in the novel) and with the previous pope's much-debated canonization of its founder (often linked with Francisco Franco's facist regime) and the discovery that convicted FBI spy Robert Hanson was a member of Opus Dei. With the expert eye of a longtime trusted observer of the Vatican and the skill of an investigative reporter intent on uncovering closely guarded secrets, John Allen finally separates the myths from the facts in Opus Dei, Granted unlimited access to the prelate who heads the organization and to Opus Dei centers throughout the world, Allen draws on a wealth of interviews with current members, as well as withhighly critical ex-members, to create an unprecedented portrait of the activities, practices, and intentions behind its veil of secrecy. Allen reveals the remarkable power that Opus Dei commands in shaping Vatican policy and presents a detailed look at the full extent of its network, which includes people in key positions in politics, banking, academia, and other influential arenas. He even describes the arcane rituals--including self-flagellation--performed to preserve and promote a spiritual tradition strange and unsettling to modern sensibilities. For years, Opus Dei has been the subject of conspiracy theories and dark, uninformed speculation. Opus Dei sets the record straight.

Title: OPUS DEI : AN OBJECTIVE LOOK BEHIND THE MYTHS AND REALITY OF THE MOST CONTROVERSIAL FORCE IN THE CATHOLIC CHURCH