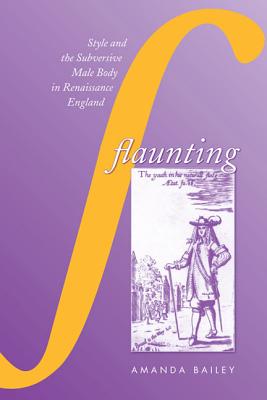 In the early modern period, the theatrical stage offered one of the most popular forms of entertainment and aesthetic pleasure. It also fulfilled an important cultural function by displaying modes of behaviour and dramatizing social interaction within a community. Flaunting argues that the theatre in late sixteenth-century England created the conditions for a subculture of style whose members came to distinguish themselves by their sartorial extravagance and social impudence.

Drawing on evidence from legal documents, economic treatises, domestic manuals, accounts of playhouse practices, and stage plays, Amanda Bailey critiques standard accounts maintaining that those who flaunted their apparel were simply aspirants, or gaudy versions of the superiors they sought to emulate. Instead, she suggests that what mattered most was not what these young men wore but how they wore their clothes. These young men shared a distinctive sartorial sensibility and used that sensibility to undermine authority at all levels of society. Flaunting therefore, examines male style as a visual form of subversion against the norms of Renaissance England with the stage as the primary source of inspiration for collective identification.

A glimpse into both the celebration of and opposition to social irreverence in the early modern period, Flaunting is a fascinating historical account of drama, fashion, and rebellion with surprisingly close parallels to the contemporary world.