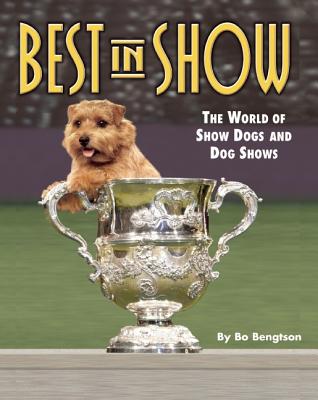 Bo Bengtson is regarded today as the foremost international authority on dog shows past and present, and his definitive volume Best in Show: The World of Show Dogs and Dog Shows has become an "instant classic," hailed by critics around the world as the most important book ever written about the sport of dogs. Richard G. Beauchamp, a revered judge and author, praises Best in Show: "At long last a factual and meticulously researched history of the purebred dog scene. It's an everything-you-ever-wanted-to know book about the fascinating world of show dogs..." Best in Show spans the history of dog shows from its beginnings in England to the present-day, highlighting the most important dogs, shows, judges, handlers, breeders, and more in 656 pages overflowing with over 700 full-color and historical black-and-white images.

Bengtson is at once a student of dog-show history, an accomplished scholar, a highly regarded international judge, a breeder of champions, and, as Kerrin Winter-Churchill surmises, "the greatest living dog writer of our times." His ultimate achievement, the award-winning Best in Show begins with a history of the dog sport, "How Dog Shows Began," a chapter that talks about the development of pure breeds, the beginnings of the dog fancy, and the first dog shows. To understand the essence of dog shows, it's critical to understand what show judges are looking for, a topic that Bengtson covers in the chapter "The Breed Standards." "Without breed standards, dog shows could not exist. It would be impossible to conduct any meaningful comparison of dogs without universally accepted descriptions of each breed.... At their best, the standards...give a vivid, colorful word picture of the image each breed represents, in motion and standing, when alert and at rest." With illustrations from early and modern breed standards, this chapter discusses the evolution of the standards and addresses the variations in certain breed standards from country to country. The third chapter is devoted to dog shows and highlights the most important shows in Britain and the United States. A detailed discussion of England's most famous dog show, Crufts, begins with the origins of the show and traces its development through the 21st century. (A complete roster of the winners of Crufts is presented in the appendix of the book.) America's most highly regarded show, the Westminster Kennel Club is discussed, accompanied by many photographs of the show and its Best in Show winners. (Roster of WKC winners can also be found in the appendix.) Bengtson also discusses other premiere shows in the U.S. including Santa Barbara, Morris & Essex, AKC/Eukanuba as well as the F d ration Cynologique Internationale's annual event, the World Dog Show. The following chapter discusses specialty shows (shows for one breed or one group), addressing the importance and purpose of specialty shows as well as some of the anomalies of certain breed events. The chapter also highlights some top winners as well as America's most famous group specialty show, the Montgomery County Kennel Club's terrier classic. Separate chapters are dedicated to the judges, breeders, and handlers who have made their mark on the sport of purebred dogs. International in scope, each chapter highlights the most accomplished individuals in the sport, summarizing their accomplishments and their special areas of expertise. The chapters also explain what's required to become a professional in the sport. The historical photographs in these chapters do a splendid job of spotlighting the careers of some of the pillars of the sport, including Anne Rogers Clark, Geraldine Rockefeller Dodge, Anna H. Whitney, Alva Rosenberg, Louis Murr, Anna Katherine Nicholas, Percy Roberts, Robert and Jane Forsyth as well as many contemporary greats such as Peter Green, Maxine Beam, Corky Vroom, Patricia Craige-Trotter, Jimmy Moses, David Fitzpatrick, Sylvia Hammarstr m, Roger Rechler, Julia Gasow, and dozens of others. The author devotes individual chapters to the greatest dogs from Britain, the United States of America, and the international scene. It is in these insightful, detailed chapters that the interplay of breeders, handlers, and dogs takes focus and the complex picture of the purebred dog scene is exposed. From studying thousands of show records and breed books and from his five decades' experience in the sport, Bengtson is able to put the sport of dog showing into perspective. He highlights important kennels, breeders, and leading dogs in each country and manages to weave all of these individual threads into an elaborate quilt that depicts the history of the sport. Each chapter chronologically presents the dogs and breeds that had the greatest impact on the show world. In the chapter "The Best of Britain," the author traces the nation's history beginning with early Best in Show winners, the emergence of the Collie and Fox Terrier as leading breeds, how other terrier breeds came to the fore in the 1920s, as well as Cocker Spaniels, Great Danes, Irish Wolfhounds, and Irish Setters. In post-war Britain, the focus shifts to Chow Chows and Poodles and then to Toy breeds, like the Pekingese, Pomeranian, and Yorkshire Terrier. The depth and breadth of each chapter, accomplished through insightful, detailed information and exhilarating photography, must be experienced to be truly appreciated. The chapter "Tops in America" is a detailed 150-page chapter--a book in itself--retells the stories of America's most beloved and accomplished show dogs. Readers will feel bolstered by the amount of information and great photography on offer here, as they meet such iconic greats as the Boxer Ch. Bang Away of Sirrah Crest, arguably the most famous show dog in history and the first to win 100 Best in Show awards; Ch. Warren Remedy, the Wire Fox Terrier whose claim to fame is three consecutive Best in Show victories at the Westminster Kennel Club; the Afghan Hound Ch. Tryst of Grand

Title: BEST IN SHOW : THE WORLD OF SHOW DOGS AND DOG SHOWS