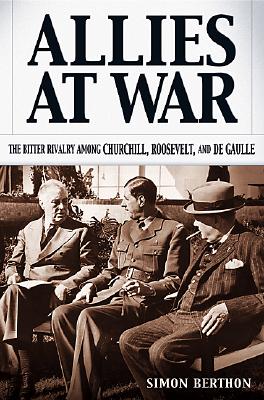 2001 VG HB IN DJ THAT IS TAPED INSIDE PASTE DOWNS [BERTHON, SIMON] BITTER RIVALRY AMONG CHURCHILL, ROOSEVELT AND DE GAULLE

Roosevelt, Churchill, De Gaulle. They held the destiny of the Free World in their Allied hands as Nazi forces stormed through Europe in the 1940s. In public, these three extraordinarily powerful men stood firmly together against Hitler. They inspired their troops and gave their nations confidence in the prospect of victory. History has made of them giants of diplomacy and unparalleled masters of strategy. Yet, in private, their relations with each other were marked by turbulence, distrust, duplicity, and ruthlessness, as this new volume in the annals of World War II history dramatically shows. A tie-in with a joint BBC/PBS special scheduled for American television in the fall, this revelatory chronicle by Simon Berthon documents an antipathy that would significantly color Allied policy and alter the postwar relations of France with Britain and America. Throughout the war in Europe, Berthon shows, Churchill and Roosevelt stood at odds with the imposing and, to them, "unreliable, uncooperative, and disloyal" Free French leader Charles De Gaulle--to the extent that they kept the Anglo-American invasion of North Africa a secret from him and sought an alternative commander. And even as late as 1943, Roosevelt supported the oppressive and collaborative Vichy government based on misinformation fed to him about De Gaulle. Probingly, with access to official archives never before available, Berthon explores an alliance as it turns profoundly sour and shows how De Gaulle not only heroically held his ground in the cause of a Free France but ultimately implemented against the "Anglo-Saxon powers" his own revenge.