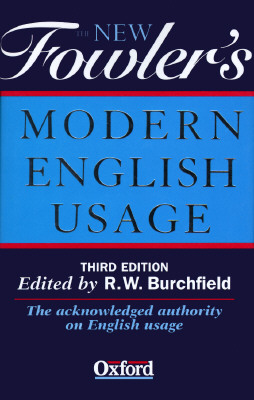 First published in 1926, A Dictionary of Modern English Usage is one of the most celebrated reference books of the twentieth century. Commonly known as "Fowler," after its inimitable author, H.W. Fowler, it has sold more than a million copies and maintained a devoted following over seven decades, in large part because of its charming blend of information and good humor, delivered in the voice of a genial if somewhat idiosyncratic schoolmaster. "Reading Fowler," William F. Buckley once noted, "provides instruction and knowledge and direction, but the whole of it is a sensual delight." And Jessica Mitford wrote that Fowler's style "has afforded me endless amusement and instruction through my very long life." The first place to turn for sensible advice on the thorny issues of grammar, meaning, and pronunciation, "Fowler" is one of those rare reference books that can also be read simply for pleasure.
Now this classic is available in a new edition--the first major revision since Fowler's original. Rewritten, updated, and expanded to take into account the vast linguistic changes of the past three-quarters of a century, here are thousands of alphabetically arranged entries, offering advice and background information on all aspects of the English language, from grammar to spelling to literary style. This masterful revision has been carried out by Robert Burchfield, hailed by The Chicago Tribune as "the greatest living lexicographer." In his hands, the MEU has retained its beloved traits--accessibility, authority, and (not least) personality--while acquiring new ones, most notably, up-to-the-minute currency. As in "Fowler," the new edition is a cornucopia of information on such troublesome areas as the plural form of foreign words (adagio, curriculum, memorandum, virus); related or like-sounding words (affect/effect, continual/continuous); rarely encountered literary terms (alcaics, alexandrine, arsis); and unusual inflected forms (for instance, taxi, taxis, taxiing). But there are also many innovations. Burchfield, who spent decades working on the Oxford English Dictionary, has introduced the OED's historical approach to the MEU, providing fascinating details on how and when new usages entered the language. In addition, he has combed novels, newspapers, and magazines to replenish the book's many illustrative sentences with new examples from the 1980s and 1990s, taken from such sources as The New Yorker and The New York Review of Books, and from such writers as Saul Bellow, John Updike, Kingsley and Martin Amis, Anita Brookner, and Penelope Lively. The new MEU also covers much more of the English-speaking world than did "Fowler"--including not only the United Kingdom and the United States, but also Canada, Australia, New Zealand, South Africa, and elsewhere--and pronunciation is now given in the International Phonetic Alphabet, with an easy-to-consult guide given across each double-page spread.
For seventy years, A Dictionary of Modern English Usage has supplied readers with information, guidance, and amusement. This major revision provides an MEU for the next century: a completely up-to-date work based on the immense databases of the Oxford English Dictionary, providing the same insightful, authoritative, and lively coverage that has long made "Fowler" a synonym for correct English.