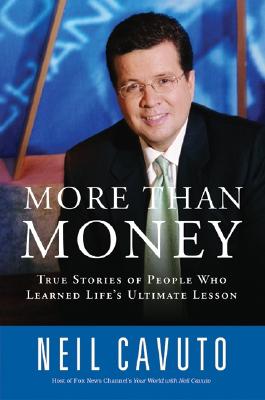 Neil Cavuto's world was turning in his favor: joining the nascent Fox News Channel in 1996, he was set to establish himself as one of business journalism's most important players. Ten years after being diagnosed with cancer, though, misfortune touched him again: He was diagnosed with multiple sclerosis. As those closest to him -- and many he didn't even know -- gathered to offer their support, Cavuto became attuned at the same time to the stories of others in the business world who had struggled with serious obstacles of their own. Now, in More Than Money, he offers portraits of the many people who have motivated and inspired him -- and whose stories can inspire us all.

The men and women Cavuto profiles have faced setbacks of all kinds -- from illness to catastrophic acts of God. But every one of them has gone on to achieve great things in spite of the odds -- reclaiming their own lives, and, just as important, taking time out to better the lives of others along the way. Among Cavuto's subjects:

Throughout, Cavuto weaves their stories and countless others into a compelling, uplifting tribute to the human spirit and the attributes that help us triumph over the obstacles, big and small, that life puts in our way. Moving, sincere, and wise, More Than Money reaffirms that true wealth is measured not by the sprawl of our bank accounts, but by the grace in our hearts.