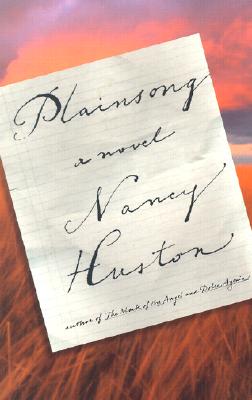 WHEN PAULA INHERITS the fragments of her grandfather Paddon's journal, she embarks on an imaginative and obsessive journey to re-create the troubled history of her ancestors. From the hardships of the early frontier, through the Great War and Depression, and into the boom times of the 1950s, "Plainsong" brilliantly captures the story of four generations of a family and a prairie town shaped by the sweeping forces of change.
Since the end of the nineteenth century, the town of Anton has been home to the Sterling family: the brothers, John and Jake Sterling, and John's son Paddon. Paddon is an intellectual, a man who intends to make a philosophical study of time his life's work, but he finds his dream defeated by a confluent series of circumstances: an early marriage to a good but unimaginative woman, the birth of one child after another, the need to support his family, the times themselves, and his own mercurial temperament.
The question of salvation is central to this evocative and incantatory novel: Can someone who considers himself a failure be "saved" by having his story told by someone who loves him deeply? Ultimately, Plainsong is a celebration of the inescapable ties of family and place, and the redemptive power of the imagination.