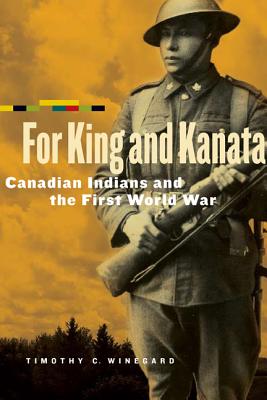 FOR KING AND KANATA: CANADIAN INDIANS AND THE FIRST WORLD WAR

The first comprehensive history of the Aboriginal First World War experience on the battlefield and the home front.When the call to arms was heard at the outbreak of the First World War, Canada's First Nations pledged their men and money to the Crown to honour their long-standing tradition of forming military alliances with Europeans during times of war, and as a means of resisting cultural assimilation and attaining equality through shared service and sacrifice. Initially, the Canadian government rejected these offers based on the belief that status Indians were unsuited to modern, civilized warfare. But in 1915, Britain intervened and demanded Canada actively recruit Indian soldiers to meet the incessant need for manpower. Thus began the complicated relationships between the Imperial Colonial and War Offices, the Department of Indian Affairs, and the Ministry of Militia that would affect every aspect of the war experience for Canada's Aboriginal soldiers.In his groundbreaking new book, For King and Kanata, Timothy C. Winegard reveals how national and international forces directly influenced the more than 4,000 status Indians who voluntarily served in the Canadian Expeditionary Force between 1914 and 1919--a per capita percentage equal to that of Euro-Canadians--and how subsequent administrative policies profoundly affected their experiences at home, on the battlefield, and as returning veterans.

Title: FOR KING AND KANATA: CANADIAN INDIANS AND THE FIRST WORLD WAR

FOR KING AND KANATA: CANADIAN INDIANS AND THE FIRST WORLD WAR